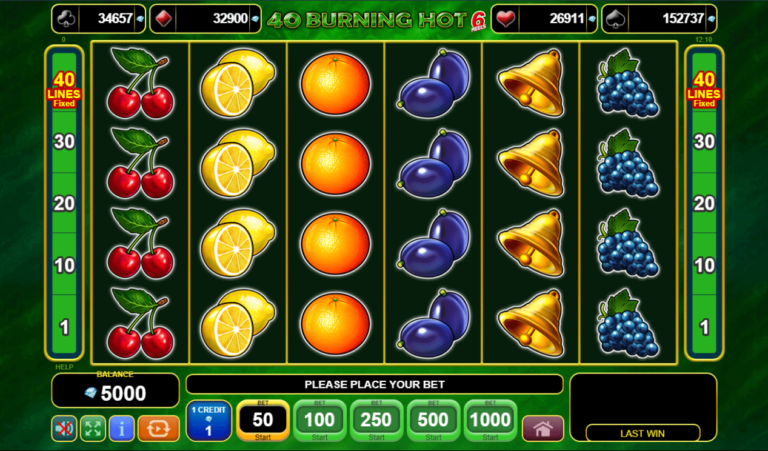 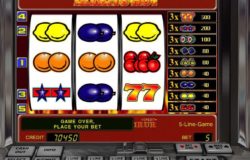 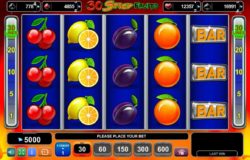 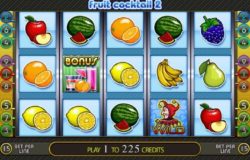 For gambling lovers, 40 Burning Hot 6 Reels is here to bring extra fun with another added drum to spin. This is one of the sequels to the classic Burning Hot Slot game. You can diversify with it if you are tired of the standard game format.

40 Burning Hot 6 Reels has also changed the size of the bets, in addition to the added sixth reel we’ve already told you about. The buttons located below are again 5 different amounts, arranged from the lowest to the highest bet – 50, 100, 250, 500, 1000. These buttons play the role of both start and stop for the drive of the slot machine.

Once the reels stop spinning on their own, or you decide to stop them, 40 Burning Hot 6 Reels gives you the opportunity to either start a new spin with a new bet, or bet the winnings at an additional bonus level. Of course, you don’t have to take advantage of it, but you can do it if you want to double the winnings from this spin. As you know, if you are a fan of casino games, in order to successfully pass the bonus level and double your amount, you need to know the color of a series of cards – whether red or black.

As mentioned, 40 Burning Hot 6 Reels is a sequel to one of the most famous slot games played by gambling fans. Any popular online casino can offer you the opportunity to play this variety of Burning Hot.

40 Burning Hot 6 Reels has 40 paylines, just like 40 Burning Hot, but the difference is that in the sequel there is an added sixth reel, hence the name – 6 Reels. The subject, as you may have guessed, is the well-known fruits. Lemons, oranges, plums, cherries, grapes and watermelon contribute to the fresh and clean design, and the symbols of the standard game, such as bell, dollar and clover, in 40 Burning Hot 6 Reels are again part of the slot with the same features, which we will recall a few Below.

Winnings vary according to your choice of bet. The bigger the bet, the bigger the current winnings can be, but the more you can lose. It also depends on your luck. In 40 Burning Hot 6 Reels, as the biggest possible bet is 1000, if you make the right combinations, you can win a lot more in a short time. Of course, a lot depends on what combinations you will be able to make during the rotation of the drums. Since scatter and wild symbols replace the symbols you need to make your combination, they are also very important for how much you will win at 40 Burning Hot 6 Reels.

You can practice gambling completely free of charge on the Kazino igri website and you can do it until you feel ready to play 40 Burning Hot 6 Reels with real money. You can play the free demo version uploaded on the site. In Kazino igri there is no possibility to bet real amounts, you only operate with virtual currency. When you decide that you want to bet real money, you can choose one of the licensed online casinos in our country. Now we will introduce you to them.

The online casinos, which have a license to conduct gambling activities in our country, offer all kinds of gambling entertainment, but also the slot game 40 Burning Hot 6 Reels: Winbet, Palms bet, Bet365, BWIN, Pokerstars. Welcome to Kazino igri to train completely free of charge, improve your skills and prepare well before the game with real money. Here you have the opportunity to try out many casino games, including 40 Burning Hot 6 Reels.

In 40 Burning Hot 6 Reels, the symbols used to make paylines are the same as in the other Burning Hot. Let us remind you:

Four-leaf clover – this is the only wild symbol in the slot 40 Burning Hot 6 Reels; replaces all of them.

In the 40 Burning Hot 6 Reels slot game, the bonuses are the same as for EGT slots. The amount won from each spin of the reels, you have the opportunity to place as a bet in an additional bonus level, in which you need to guess the color of the card – black or red. If you guess the color of each card, the bet amount is doubled, but if you do not guess, you lose the bet.

Another bonus you know from 40 Burning Hot is the mysterious jackpot at the end of the game session. It again has four levels according to the colors of the cards – diamond, spade, bowl, spade. In 40 Burning Hot 6 Reels you can win any of the four jackpots – just turn over three of the same 12 cards while face down. Each paint has a different value and corresponds to a corresponding amount.

There are different strategies you can try. It depends on how willing you are to take the risk. The good thing is that the game 40 Burning Hot 6 Reels has a high return as much as the previous version to its players – 95.9%. You can take risks and try with larger amounts, but this can mean both bigger profits and bigger losses. Moderate risk is the best strategy that all experienced gamblers offer.

Bonus rounds can help increase winnings faster. Here we advise you not to bet too high amounts, because they can be easily lost, and the chance of winning is 50/50. So for these bonuses, the best strategy you can bet on is to win a relatively small amount before the bonus level. This way, even if you don’t guess the color of the cards correctly, you won’t notice a significant loss.

The game is suitable for all types of devices, so you can easily operate both on your smartphone and tablet if you need a larger display. All you need is a Flash player installed, which, if you don’t have one, can be easily found on the Internet and downloaded. 40 Burning Hot 6 Reels works seamlessly in all formats.

The manufacturer of 40 Burning Hot 6 Reels is EGT Interactive. This is a Bulgarian company with many years of experience and an international license.

40 Burning Hot 6 Reels has 40 lines, as the name of the game suggests.

The reels in the 40 Burning Hot 6 Reels have been increased from the standard 5 to 6.

The topic is again – fruits.

By continuing to browse the site you are agreeing to our use of cookies.