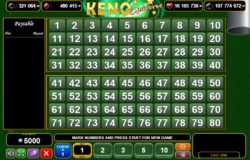 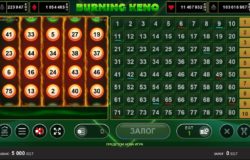 Lotto, lottery and bingo are very popular gambling games around the world. In fact, they are based on Keno – the oldest game of its kind. Legend has it that it was invented in ancient China after wealthy Chinese did not want to support the then emperor. This decision came out quite salty for them later, because the emperor created the game Keno. The elite of that time began to play so often that the revenues were large enough to begin the construction of the Great Wall of China.

Thanks to the cunning of the Chinese emperor, we can now enjoy this game even from the comfort of our own home. As a matter of fact, Keno is widely known in many countries, including England, the United States and Canada. In Bulgaria, it is still gaining popularity among people who like to try their luck regularly.

If you are a fan of gambling, but have not yet encountered Keno, we advise you to first try the free online version of the game on our site Casino Games. There you will not only get acquainted with the most important information about the game, but you will also have the chance to try it long before you bet your personal funds. This will allow you to get used to the game, to get acquainted with the rules that are easy and easy to remember. You will need strategy and a little luck to start building your personal great wall!

Varieties of Keno in online casinos

Although the classic Keno is so interesting and gambling fans love the game, later included several other types of tickets that you can play with, and they are: combined, royal, upper and lower, left and right, final and more. With each ticket, the player has the opportunity to play Keno differently without changing the overall game. You have the right to play with more than one ticket at a time. This gives you the chance to increase your potential winnings in just one game.

No matter which tickets catch your eye, the Keno games on our site are completely free and give you the opportunity to experience the pleasure of the game without risk. So you can start your adventure in the world of gambling before you start playing for real money.

Where you can play Keno for real money

Kazino igri is an easily accessible interactive platform where you can find not only free versions of your favorite gambling games, but also direct you to the most popular casinos in Bulgaria, such as Winbet, bet365, Palmsbet and others. The Kazino igri team strongly recommends that you find out about the terms and conditions of each of the casinos before playing Keno with your funds.

In most casinos around the world, the odds are the same for knowing 17,18,19 and 20 numbers. This is due to the fact that it is almost impossible to hit all 20 numbers.

One of the biggest advantages of Keno among casino games is that it is not necessary at all and with very modest amounts you can make excellent winnings.

As already mentioned, the numbers in the Keno game are generated randomly and whether you play online or in a physical casino, the chances of winning are based on your luck.

No, you only need to have a stable internet connection and a suitable device.

For those of you who think more logically, strategy will be useful for Keno’s game. Some of the most popular strategies are: 1-3-2-6 strategy, Martingale strategy and Passwords strategy. After all, numbers are randomly generated, and if you have a well-developed sixth sense, it would be a good idea to trust it.

If you have already tried the game and want to experience the thrill of real Keno, we at Kazino Igri have prepared a short list of possible online casinos.

The great thing is that in some of them you can find no deposit bonuses to use for some of the games. Another good news is that you can become a loyal customer of these bookmakers, which gives you the right to use quite attractive bonuses. Here is the list of casinos we partner with:

Thanks to its mechanism, the Keno game cannot be fooled. This is due to the fact that the numbers are generated at random and there is no danger of such a risk.

By continuing to browse this site, you agree to our use of cookies.